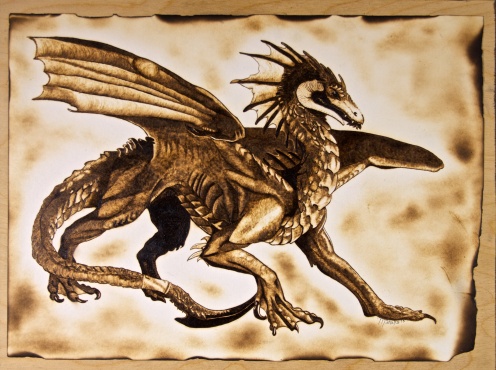 Who doesn’t like dragons right? I’ve named this guy Percival the Fierce. He wears a band on his tail because he was raised in captivity, but he is a captive no longer. His stance is fierce and defensive, although he has been badly used he is not attacking unless his aggressor comes any closer. The smoke from his nostrils is in preparation for a fight, not the result of burning down a village. On the leather work he guards a map to ancient treasure on the Irish coast. His title is written below him in ancient Celtic with a tiny British knight riding the D. He is not afraid of the knight as demonstrated by the fact that he has not yet turned to face him.

On the paper burning of Percival is seems that the fire he breaths has scorched the very paper that has given him life.