Ade is an outstanding Pyrographer and friend. When St Cuthbers heard that he was using their paper for Pyrography, they were intrigued. They asked him to approach other Pyrographers and get them to write reviews.  Here is mine.

Only the two pieces labeled HP were smooth texture, the rest had considerable tooth or rough texture.

I chose a series of beetles to burn on these seven pieces of paper hoping to achieve a degree of uniformity without having to duplicate one single image seven times. I used the AiTool, portable soldering iron, a solid brass tip style burner, on High (480 degrees). Using mostly the small ball tip and the calligraphy tip.

All seven pieces and styles of paper  burned acceptably well, with minimal warping and very little show on the reverse.

My first attempt was on the Millford piece. I was using the calligraphy tip, one of my favorites, and in order to darken the paper as dark as possible I damaged it. I over- burned it and the top layer came away.

The darker part on his head is where I re touched it with some ink. After the surface has been damaged it will not burn dark. After that I switched to the small ball tip. The problem was that the calligraphy tip was not riding over the rough tooth of the paper. The ball tip will press the surface down as it goes and with it I was able to achieve a much darker tone, his legs for instance. However, not a smooth, shiny texture, more of a dimpled effect. 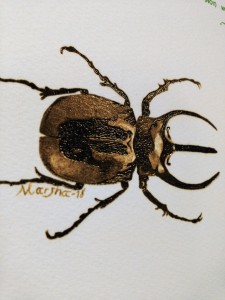 For the remainder of the rough samples I mainly used the ball tip, working in tiny circles to press and burn the image.

On the two samples of smooth tooth, labeled HP on the chart, I switched back to the calligraphy tip and was able to burn faster and to achieve a much more polished, glossy result.  This is all a matter of taste and preference for the results. Because beetles are known for their shiny hard exoskeletons I was a bit disappointed in the rough paper. However, it would make lovely tree bark.

This was a very wonderful opportunity to try these samples and learn more about paper.

Individual pictures to follow for those who want more. 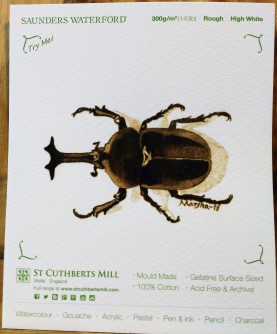 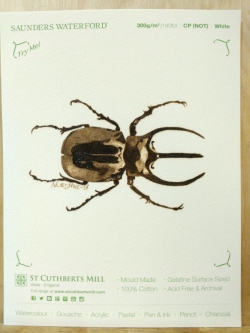 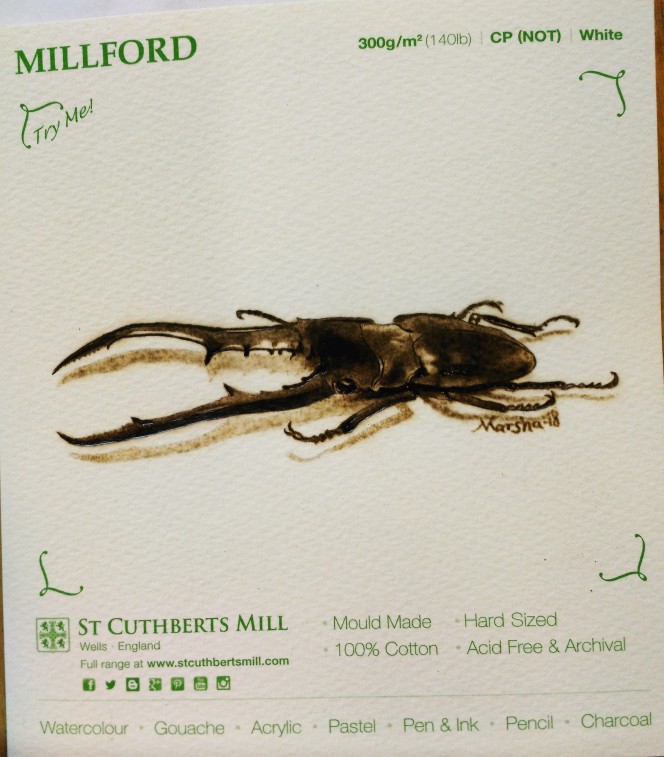